Little Library – Books Reviews. Every month, members of InclusioNado will read and review books on topics of diversity with diverse perspectives. Copies of the books reviewed will be distributed to Little Libraries all around Coronado for the community to read and return. 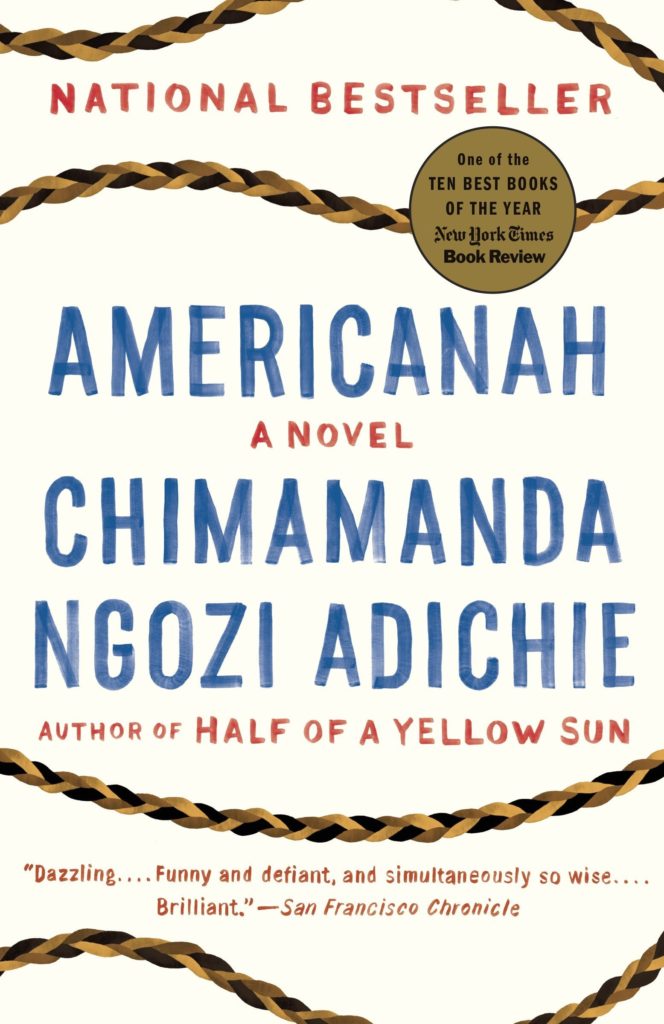 Young lovers Ifemelu and Obinze grow up in Nigeria and are forced to separate as Ifemelu moves to the United States to pursue higher education opportunities. Obinze soon leaves Nigeria to go to England and live as an undocumented immigrant. Both encounter personal and professional struggles in their new lives driven around their race and identities. Obinze then moves back to Nigeria and finds a wife and economic success. Ifemelu struggles in the United States, but she finds comfort in writing for her blog: Raceteenth or Various Observations About American Blacks (Those Formerly Known as Negroes) by a Non-American Black. After spending many years in the United States and longing for her home, Ifemelu moves back to Nigeria. The two reconnect and rekindle their relationship amid their current lives.

I loved reading this story! I was most intrigued to read this novel because of learning about the Black experience from a non-American Black. I think this viewpoint is critical to learning about race in general, and especially in America. I also really enjoyed reading about Ifemelu and her courage when facing personal and professional challenges. I think how she uses words to drive change is so important to educating others. 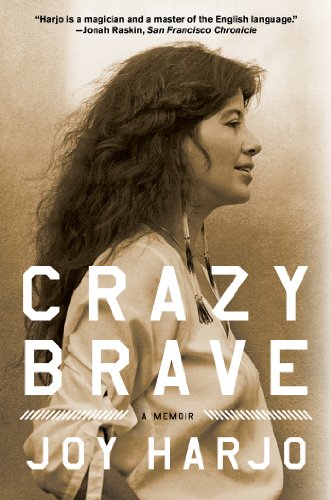 This is a memoir of Harjo’s childgood and early adulthood as an Indian in Oklahoma and New Mexico in the 1950s-1970s. It is written by a true storyteller who weaves the spiritual into her straightforward reflection on her life. The book chronicles her openhearted early days of great connection to all things, her childhood spent avoiding an abusive stepfather, her journey into art, love, a teen pregnancy, domestic abuse, and the overarching grace that she kept finding. Throughout her life, there was a knowingness that offered quiet guidance. She often followed it and sometimes did not. The presence of knowingness is the constant backdrop in her life as were the leaky boundaries between this world and other worlds that allowed her to gain strength directly from her ancestors.

Harjo tells her story as part of her ancestors’ story in clear, honest language that honors all who play their part in the story.  It is easy to read in a few hours but will stay with you much longer because it is a vivid account of one Creek girl’s experience in this world and other worlds.

August 2021: Killers of the Flower Moon: The Osage Murders and the Birth of the F.B.I. by David Grann 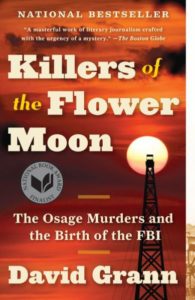 Writer and journalist David Grann gives a detailed and chilling account of a little-known chapter in American history: the Osage “Reign of Terror” that began in the 1920s when more than 20 members of the Osage Nation in Oklahoma were mysteriously murdered by nefarious white settlers. After oil was discovered beneath their land, the Osage became the wealthiest people per capita in the country. However, the government deemed them “incompetent,” and laws were enacted to force them into guardianships so that their white neighbors could control their fortunes. One by one, the Osage began dying under mysterious circumstances, and many who tried to investigate the murders were themselves killed. As the death toll increased, the newly created F.B.I. (under the control of J. Edgar Hoover) began investigating with the help of bootleggers, moonshiners, cattle rustlers and others. Eventually, a former cattle rancher (who is also a deputy sheriff) is convicted of some of the crimes and receives a life sentence, but most of the Osage murders were never solved and justice for the Osage people was never truly obtained.

reads like the plot of a detective novel. It is full of suspense and intrigue, and is brilliantly

written to expose the outrageous cruelty, trickery and evil that was perpetrated on the Osage

Nation over the course of nearly two decades. For me, it was unsettling to discover this sinister

culture of killing and complicity, and interesting to learn that a clash of two cultures led to the

emergence of modern law enforcement. Most of all, reading this book made me wonder: How

1. Before reading this book, did you know anything about the Osage murders? Why do
you think they were forgotten? Should this be taught in schools??

2. Was it a racist system that allowed the government to prohibit the Osage from spending
their own money? Discuss the pretense of enlightenment that the Osage needed
protection.

3. What emotions did Mollie Burkhart evoke in you as she experienced the deaths of her
family members one by one? When do you think Mollie began to suspect that her
husband was complicit in the murders?

4. The investigation of the Osage murders was the F.B.I.’s first big case. How do you think
it was handled? Were you surprised to learn these murders may have numbered in the
hundreds?

5. The author laments that “History is a merciless judge.” Discuss what this means to you.

July 2021: The Song of Achilles by Madeline Miller

The Song of Achilles is a novel based on the relationship between the Greek prince Achilles and his friend and lover Patroclus. The book describes their time in Phthia as friends, and then their training with the centaur Chiron into lovers. Then as the Trojan War calls Achilles, Patrolcus accompanies him at his side as Achilles transitions into a great hero. This story delves deep into the meaning of true love and companionship even in the hardest of times.

I genuinely cried reading this book because of how beautifully Miller describes the relationship between Achilles and Patroclus. The Greeks were known to have relationships with both sexes, but to read a fiction novel about a homosexual relationship in a time long ago was so unique. While reading this book, I got to learn so much more about Greek mythology. When I was a freshman at CHS, I learned general information about the Trojan War in English 9 that contributed to my understanding of this book. This book does have some PG-13 scenes, so I recommend this book if you are 16 years old and older.

1. How does Achilles’s family accept/reject Patroclus as his partner?

3. What information did you learn about Greek gods and princes from this book?

4. Do you think lovers have a right to be buried next to each other, even if their family disapproves of them?

June 2021: The Game of Silence by Louise Erdrich

Omakayas, or Little Frog, lives on an island in Lake Superior in 1850 with her tribe: the Ojibwe.
The regular daily routines of Omakayas’s days are interrupted by a surprise visit from a group of desperate and mysterious people. From them, she learns that all their lives may drastically change because the white people want Omakayas and her people to leave their island in Lake Superior and move farther west. Omakayas comes to the conclusion her life and home are in extreme danger.

I enjoyed reading this novel because it provided me with a book on American Indians told by one herself, Erdrich. I usually only read about American Indians out of the spotlight; for example, during Thanksgiving I read books about how the Pilgrims settled in Jamestown and were assisted by American Indians. The story being told from a young girl’s perspective makes this book perfect for elementary and middle school children. I read this as a 17-year-old girl, and I recommend it to high schoolers and adults as well. In addition, I really enjoyed learning about the Ojibwe tribe. It is mind-opening to learn so much about other people’s cultures and how they differ from our own.

1. Do you know anything about the Ojibwe tribe? Why do or don’t you?

2. Find a cool example of Omakayas’s culture from the book!

3. Little Frog was given her name because her first step was a hop and she lives on an island. What would your name be if naming was based on this category in your culture?

4. Would you feel comfortable taking in strangers who come to your land (refugees)?

5. How would you feel if you were forced to move?

6. What does family mean to you?

May 2021: Uncomfortable Conversations With a Black Man by Emmanuel Acho 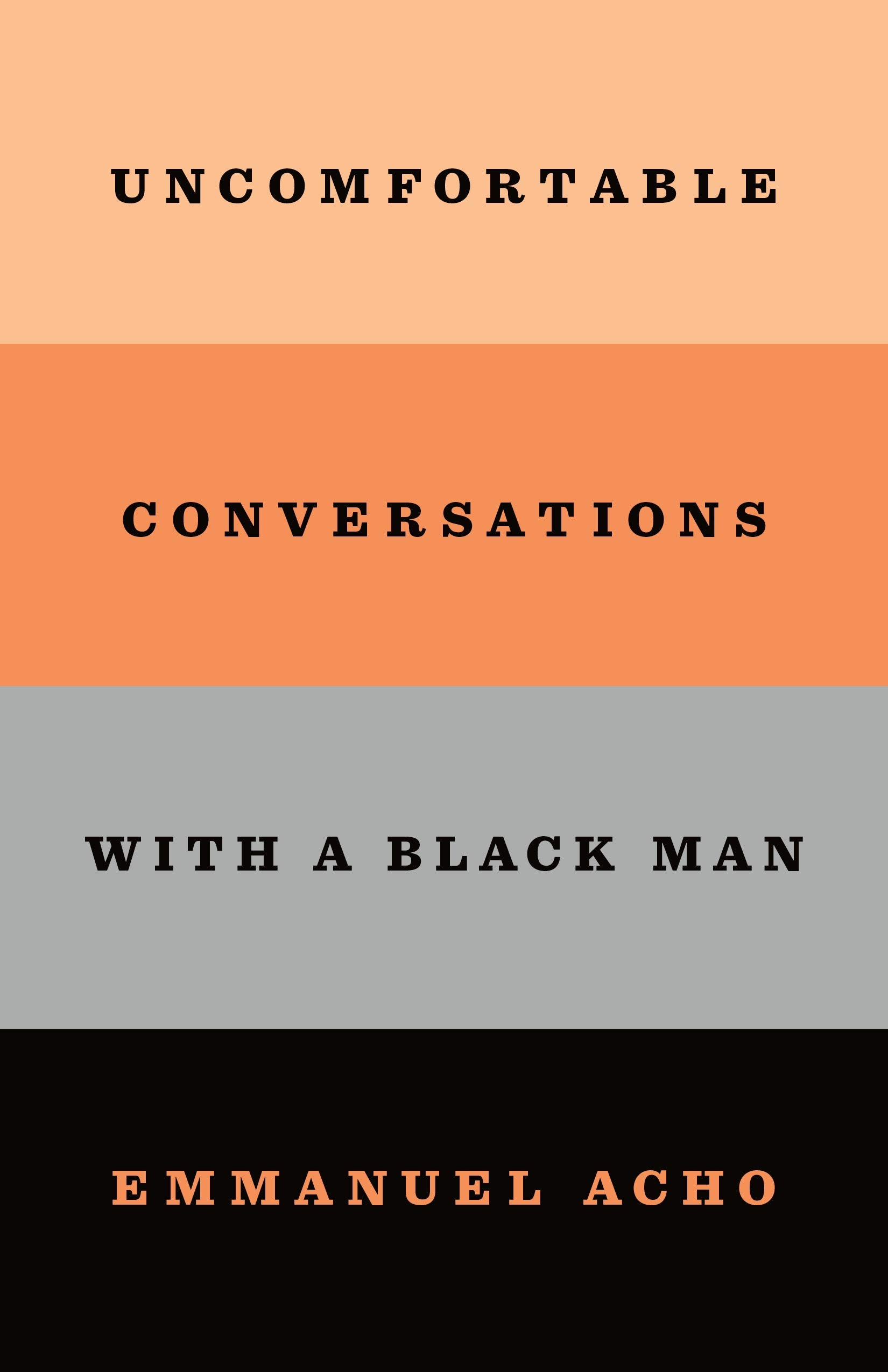 Emmanuel Acho, the son of African immigrant parents, a former NFL player and national sports analyst has recently been spending time writing this book and producing videos of uncomfortable conversations about race and racism. This book welcomes the reader into a frank conversation. He answers questions you may have always wanted to ask a Black friend.

I enjoyed this book for its refreshing honesty and straightforward approach to racism. Let’s talk about topics we’ve avoided! Acho openly shares personal stories and his take on historical and current events in a way that is open and engaging. I highly recommend this book and his Uncomfortable Conversation videos with celebrities, athletes and the police. Good for teenagers too.

The best take away from this book is the courage, honesty and kindness he models in having frank, open conversations about race and racism in America. This book or the videos could be used for family discussions about some of the questions he answers such as:

1. What language do we use when referring to Black Americans?

2. Is reverse racism a real problem?

3. Why are many Black families plagued with poverty and crime and lack of father figure?

4. Is there bias in our justice system?

Twelve-year-old Lanesha lives with her loving caretaker, Mama Ya-Ya, in a historically Black part of New Orleans’ Ninth Ward. Lanesha does not have many nice things in life but she has a dog, fiercely loyal friends, and family that make her happy. When Hurricane Katrina devastates New Orleans, Lanesha experiences tragedies and happiness while trying to return to normal life.

As a teenager, I enjoyed reading this book written from Lanesha’s point of view. Although Lanesha is 12 years old, her character is relatable for older readers. Lanesha’s struggle to return to safety is the main plot, but the setting and references to history and black culture help the reader learn more about this difficult time and Black culture. While there are several sad moments in the book, there are also uplifting moments showing Lanesha’s intelligence, courage and bravery. Overall, I highly recommend this book as an interesting way to learn about Hurricane Katrina and the impact on Black communities through the narrative of a child.

2. What is special about Lanesha? What gifts do you have that are unique in your family or neighborhood?

3. Why does Lanesha get involved when there is a fight? How would you handle bullies in your school or neighborhood?

4. Why doesn’t Lanesha leave New Orleans when the hurricane is coming? Why do some people stay while others evacuate?

5. How do they survive the flood? How does Lanesha save the day with her mathematical thinking?

6. What would you do if Coronado flooded? Where would you go?